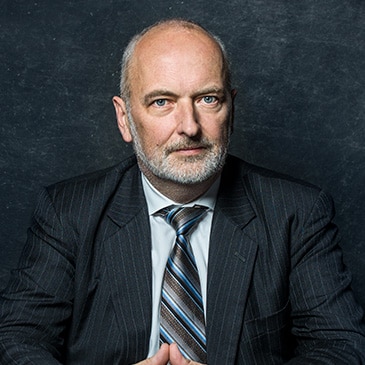 Connect with me
Refer Ken

Ken McEwan practices as general counsel focusing on complex corporate-commercial litigation, class action litigation, commercial arbitration and administrative law at the trial and appellate levels, including the Supreme Court of Canada. He received the designation of King’s Counsel from the Attorney General of British Columbia in 2004. Martindale-Hubbell has given Ken a ranking of AV-Preeminent.

Chambers Canada consistently ranks Ken in Band 1 for dispute resolution and has noted he enjoys a stellar reputation … interviewees say he is “absolutely spectacular,” describing him as “incredibly detail-orientated” and “very talented” while Chambers Global quotes interviewees describing him as a “terrific lawyer” acclaimed for his handling of securities cases, and with a wealth of trial experience. In addition to his Band 1 Dispute Resolution ranking, he is ranked in Band 2 for Securities Litigation.

After two prior nominations, Benchmark Canada recognized Ken as 2022 Canadian Trial Lawyer of the Year, having previously recognized him in seven of eight preceding years as British Columbia Litigator of the Year. Since 2017 he has been recognized as one of the top 50 trial lawyers in Canada.

For many years, Ken has been named in Lexpert’s Guide to the Leading 100 U.S./Canada Cross-border Litigators, as well as in the Lexpert/American Lawyer Guide to the Leading 500 Lawyers in Canada. He is rated by Lexpert as most frequently recommended in corporate commercial litigation, and is recognized in product liability, director and officer liability, and securities litigation.

Ken is a past President of the International Society of Barristers, the first Canadian president of the peer review organization. He is a Fellow of the American College of Trial Lawyers, a Director of its Canadian Foundation, and a member of its ethics and professionalism committee. He is a former Director of the Advocates’ Society, as well as Chair of its national standing committee, and a Fellow of The International Academy of Trial Lawyers. He has been appointed by the Law Society of British Columbia to its committee on relations with the judiciary and was a long-standing member of the Attorney General’s rules revisions committee.

Ken is the author of the fourth edition of Sopinka on the Trial of an Action, a leading text on trial practice, including jury trials, published in 2020. He is an adjunct professor of law at the University of British Columbia Law School, teaching its advanced trial advocacy course. In recent years, he taught Dispute Resolution 2 at Thompson Rivers University. He is a past president of the Sopinka Cup Society which hosts the national finals of the Canadian law school trial moot competition in Ottawa and contributes regularly to both the Continuing Legal Education Society of British Columbia and the Advocates’ Society on topics related to litigation and arbitration. He chairs a panel of the British Columbia Inns of Court project which was established to foster professionalism among young lawyers.

Ken is the managing partner of McEwan Partners, founded five years ago, twice recognized by Benchmark as Canadian Boutique of the Year, and three times as British Columbia Litigation Firm of the Year. He also provides consulting services to select clients.

In Rogers v. Rogers Communications Inc., 2021 BCSC 2184, Ken McEwan, K.C., Emily Kirkpatrick and William Stransky successfully represented Edward Rogers, as the authorized representative of the majority shareholder, in a dispute as to the validity and effectiveness of a consent resolution he initiated to remove and replace five of Rogers Communications’ board members.

This case arose in the context of a corporate governance dispute. Rogers Communications, a British Columbia company, was originally controlled by Mr. Ted Rogers. Following his death, his voting shares were passed to the Rogers Control Trust, which controls approximately 97.52% of the Class A Voting Shares and approximately 9.89% of the Class B Non-Voting Shares, and of which Mr. Edward Rogers is the chair. Following a disagreement regarding the management of the company, Mr. Rogers submitted a written resolution replacing 5 of the company’s 14 directors and voted the control trust’s shares in support of it, relying on certain provisions of the British Columbia Business Corporations Act.  The company’s management, with the support of certain overholding and remaining directors, suggested the resolution was “invalid” and argued that a duly called shareholders’ meeting was required.

In reasons issued on November 5, 2021, the Court concluded that the process by which Mr. Rogers obtained the consent resolution was available to him under the company’s Articles and the Act, ordered the company to confirm the replacement directors and all the related relief sought, and ordered costs be payable to Mr. Rogers by the company. In doing so, the Court interpreted for the first-time (a) certain provisions unique to British Columbia company law in Canada, including its definition of “consent resolution”, the guidelines and requirements for submitting such resolutions, and the validity and effect of such resolutions; and (b) the effect of a dual-class shareholder structure on such issues.

The appeal related to Keltic’s successful application under s. 215 of the Land Title Act to discharge a certificate of pending litigation filed by the plaintiff against Keltic’s residential and commercial development project. The plaintiff alleged that it entered into a purchase and sale agreement with Keltic for a portion of the commercial space in the development and filed a certificate of pending litigation against the entire commercial property. In dismissing the appeal, the Court of Appeal confirmed that the plaintiff’s claim to a present interest in land “to be subdivided” was “precisely what is prohibited by s. 73(6) of the Land Title Act”. The full reasons of the Court of Appeal can be found

Counsel to the defendants in a dispute between two shareholders of a large roofing supply distribution company over the purchase of one shareholder’s interest by the other.

The Law Society of British Columbia v. A Solicitor

In June 2017, Ken represented the Law Society of British Columbia in professional disciplinary proceedings concerning a lawyer’s receipt and disbursement of $26 million from offshore jurisdictions.

Ken successfully obtained a dismissal of the claim after five weeks of trial as an abuse of process.

Ken successfully led the defence of Fortress Paper Ltd. and Fortress Specialty Cellulose Inc. against a claim alleging knowing assistance in breach of trust, breach of confidence, and inducing breach of contract.

Ken successfully led the defence of a claim by owners of a residential development against the developer and adjacent property owners for additional parking stalls in a shared underground parking facility.

Successfully defended an application brought against a national law firm claiming a disqualifying conflict of interest.

Ken McEwan, K.C. and Emily Kirkpatrick successfully defeated a shareholder application to bring a derivative action against current and former directors and officers of Lions Gate.

Ken successfully brought an insufficient evidence motion when the plaintiffs’ case closed after 13 days of trial.

Successfully represented the respondent numbered corporation in an appeal concerning the scope and applicability of the implied undertaking rule.

Ken acted as counsel for Capital One Bank (Canada Branch) in an application to certify a class action against the credit card industry in Canada.

Ken McEwan, Q.C. Successful for the Defendant Corporations in a Summary Trial Application to Recover Shares Forfeited under a Sunset Clause Provision in a Corporate Reorganization. The plaintiff held shares in a corporation which became the defendant corporation. Pursuant to a sunset clause in a plan of arrangement, the plaintiff was required to take action to ensure that his interests in the predecessor corporation flowed into the newly-formed corporations. The plaintiff failed to take any action despite repeated notice. Once the limitation period had expired and the plaintiff’s shares had been extinguished, the plaintiff brought a claim for the value of his now-extinguished shares. The defendants were successful on all grounds, and the claim was dismissed with costs. Read case here.

Ken McEwan, K.C. and Eileen Patel represented Cargill, and successfully opposed certification of a class action alleging anti-competitive behaviour in the market for high fructose corn syrup. The case was awarded the National Impact Case of the Year by Benchmark and was one of the top 10 litigation cases of the year as listed by Lexpert.

Acted for the defendant developer in a case regarding the interpretation of a provision in a contract of purchase and sale.

Ken successfully led the defence in opposing a certification application in a proposed class action concerning the purchase of development units in the Private Residences at the Hotel Georgia.

Ken McEwan, Q.C., acting for the defendants, was successful in an application to have a breach of contract action stayed on jurisdictional grounds. The parties entered into a contract under which the plaintiff would operate a gold mine in Guinea, West Africa. The relationship between the parties subsequently broke down, and the plaintiff brought an action alleging misconduct relating to the operation of the mine. The defendants brought an application seeking to stay the action on jurisdictional grounds. The contract between the parties contained a forum selection clause that designated South Africa as the appropriate jurisdiction, and the parties had minimal connection to the Yukon. The Court substantially agreed with the defendants’ arguments, allowing the application and declining to assume jurisdiction.

Ken McEwan, Q.C. acted for the respondent bondholder in defence of an oppression claim brought by an unsuccessful bidder in a proxy contest. The bondholder held significant debt in a media and entertainment corporation. The petitioner sought to set aside a series of transactions that resulted in the conversion of the bondholder’s debt to equity and the subsequent sale of that equity to an investment fund. The petitioner argued that these transactions were oppressive and unfairly prejudicial to the petitioner, as they diluted the petitioner’s holdings and thereby impeded a takeover claim. The court accepted the bondholder’s arguments that the transactions were in the best interests of the corporation, and dismissed the oppression claim.

Ken McEwan, Q.C. successful in opposing the plaintiff’s summary trial application and instead having the matter set for trial. The dispute centered on an international business relationship between entities in Canada and the Czech Republic. The court accepted the defendants’ arguments that the matter was highly unsuitable for summary disposition.

Ken McEwan, Q.C. successful in an appeal of a British Columbia Supreme Court order striking the appellant’s third party notice issued against Her Majesty the Queen in Right of Canada. The underlying litigation was a class proceeding brought by purchasers of tobacco products alleging violations of consumer protection legislation. The appellants brought a third party notice against Canada, but it was struck by the Supreme Court on the basis that it was plain and obvious the claims against Canada could not succeed. The majority of a five-member panel of the Court of Appeal accepted Ken’s arguments that the Supreme Court had erred in striking the third party notice.