Since its inception in 2017, McEwan Partners has partnered with Moraine Winery for our branded label of their Meritage wine, adding their Cliffhanger White and Frizzante Chipuchka in 2020. Our images show pictures of historic British Columbia on the front, and associated stories on the back. 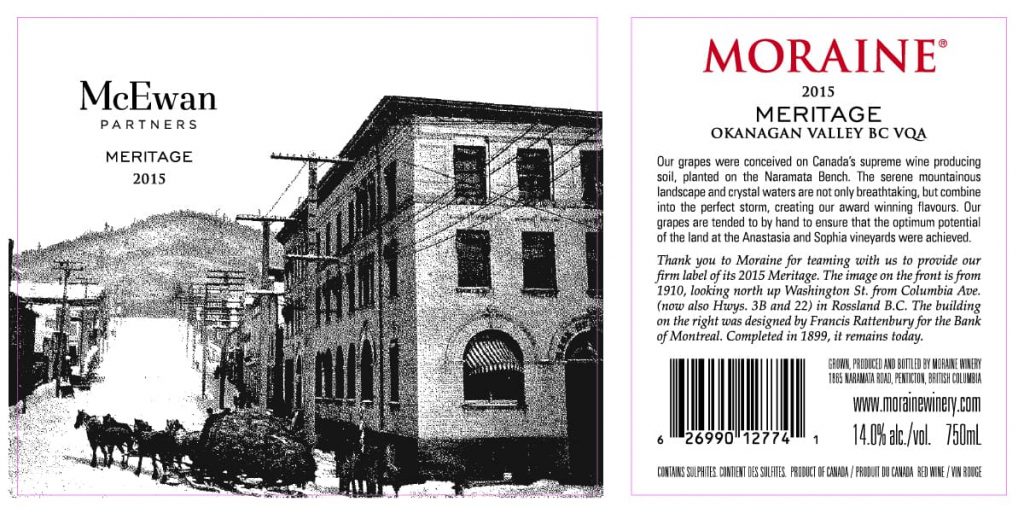 The image on the label is from 1910, looking north up Washington St. from Columbia Ave. (now also Hwys. 3B and 22) in Rossland, B.C. The building on the right was designed by Francis Rattenbury for the Bank of Montreal. Completed in 1899, it remains today. 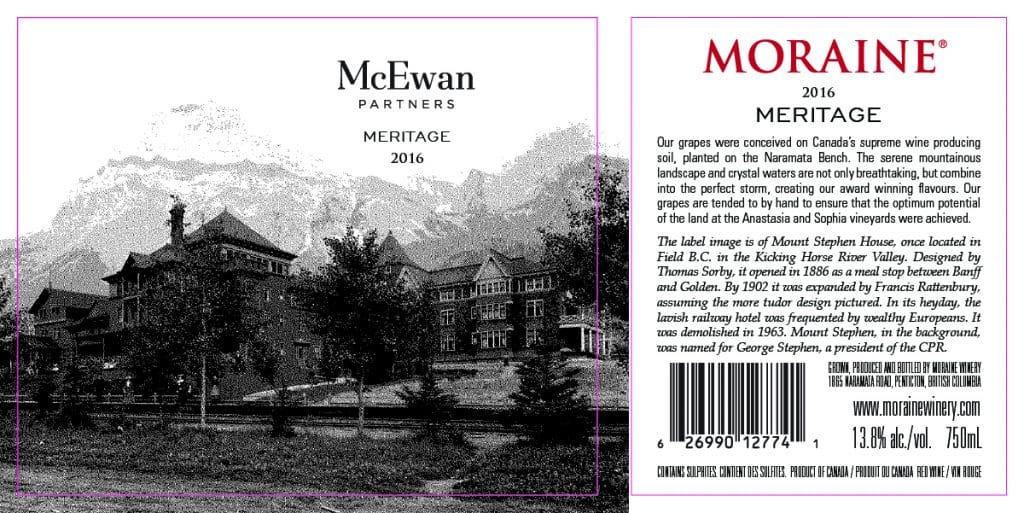 The label image is of Mount Stephen House, once located in Field B.C. in the Kicking Horse River Valley. Designed by Thomas Sorby, it opened in 1886 as a meal stop between Banff and Golden. By 1902 it was expanded by Francis Rattenbury, assuming the more tudor design pictured. In its heyday, the lavish railway hotel was frequented by wealthy Europeans. It was demolished in 1963. Mount Stephen, in the background, was named for George Stephen, a president of the CPR. 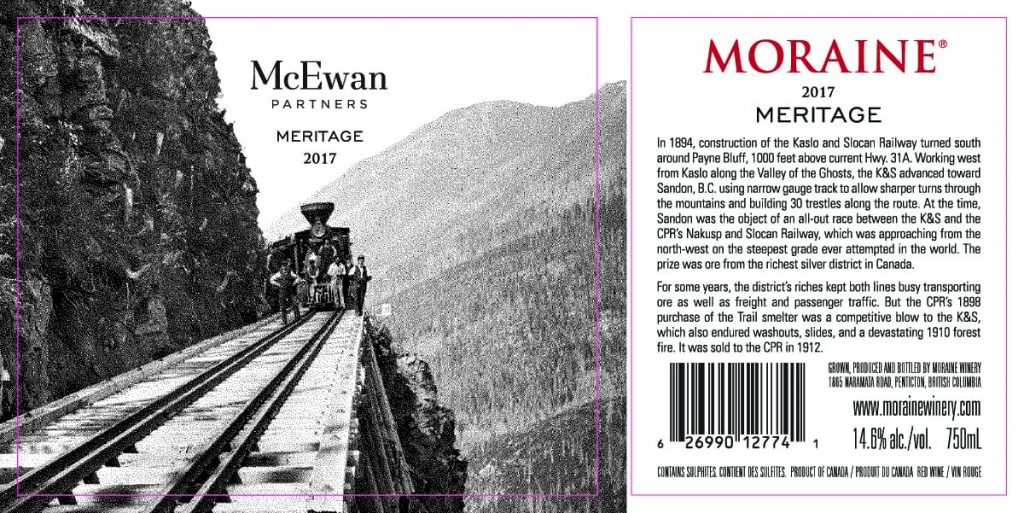 In 1894, construction of the Kaslo and Slocan Railway turned south around Payne Bluff, 1000 feet above current Hwy. 31A. Working west from Kaslo along the Valley of the Ghosts, the K&S advanced toward Sandon, B.C. using narrow gauge track to allow sharper turns around the mountains and building 30 trestles along the route. At the time, Sandon was the object of an all-out race between the K&S and the CPR’s Nakusp and Slocan Railway, which was approaching from the north-west on the steepest grade ever attempted in the world. The prize was ore from the richest silver district in Canada.

For some years, the district’s riches kept both lines busy transporting ore as well as freight and passenger traffic. But the CPR’s 1898 purchase of the Trail smelter was a competitive blow to the K&S, which also endured washouts, slides and a devastating 1910 forest fire. It was sold to the CPR in 1912. 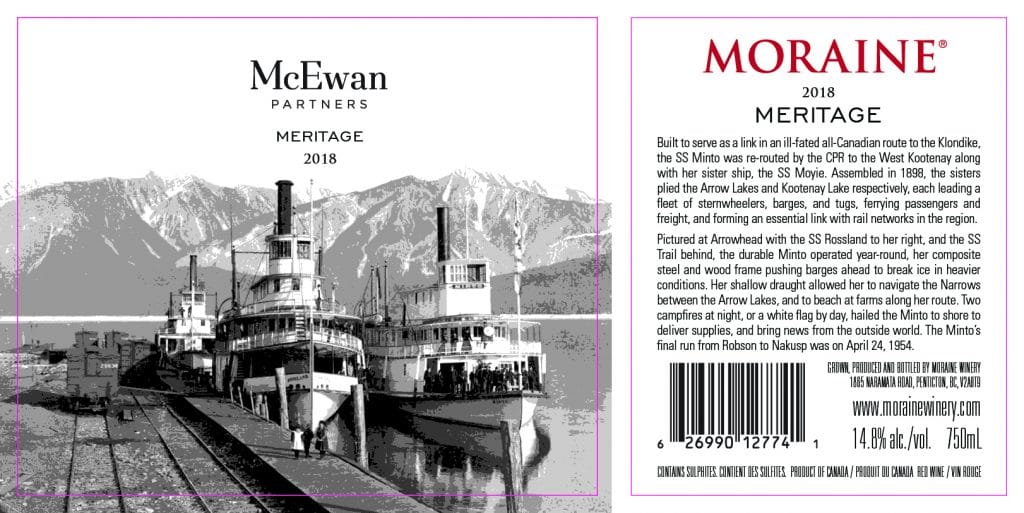 Built to serve as a link in an ill-fated all-Canadian route to the Klondike, the SS Minto was re-routed by the CPR to the West Kootenay along with her sister ship, the SS Moyie. Assembled in 1898, the sisters plied the Arrow Lakes and Kootenay Lake respectively, each leading a fleet of sternwheelers, barges and tugs, ferrying passengers and freight, and forming an essential link with rail networks in the region. Pictured at Arrowhead with the SS Rossland to her right, the SS Trail behind, the durable Minto operated year-round, her composite steel and wood frame pushing barges ahead to break ice in heavier conditions. Her shallow draught allowed her to navigate the Narrows between the Arrow Lakes, and to beach at farms along her route. Two campfires at night, or a white flag by day, hailed the Minto to shore to deliver supplies, and bring news from the outside world. The Minto’s final run from Robson to Nakusp was on April 24, 1954. 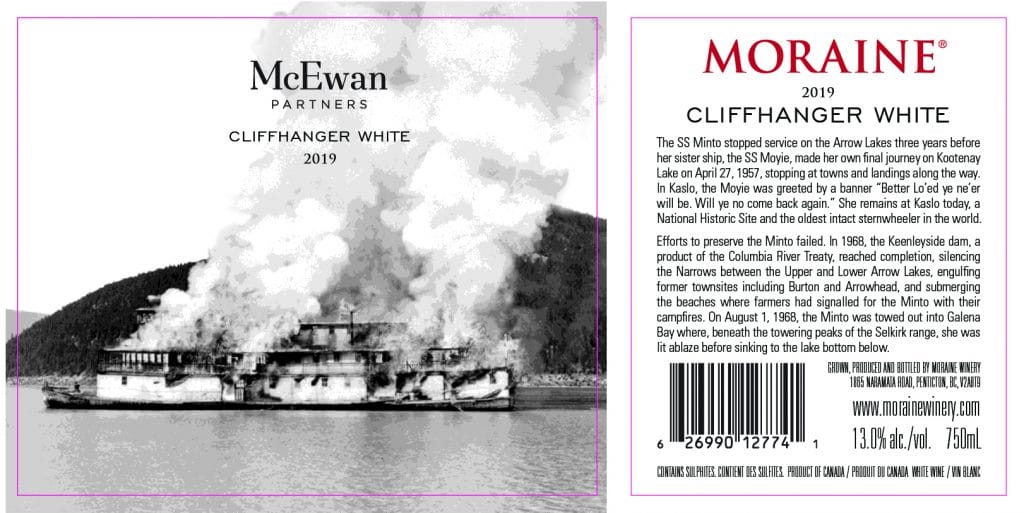 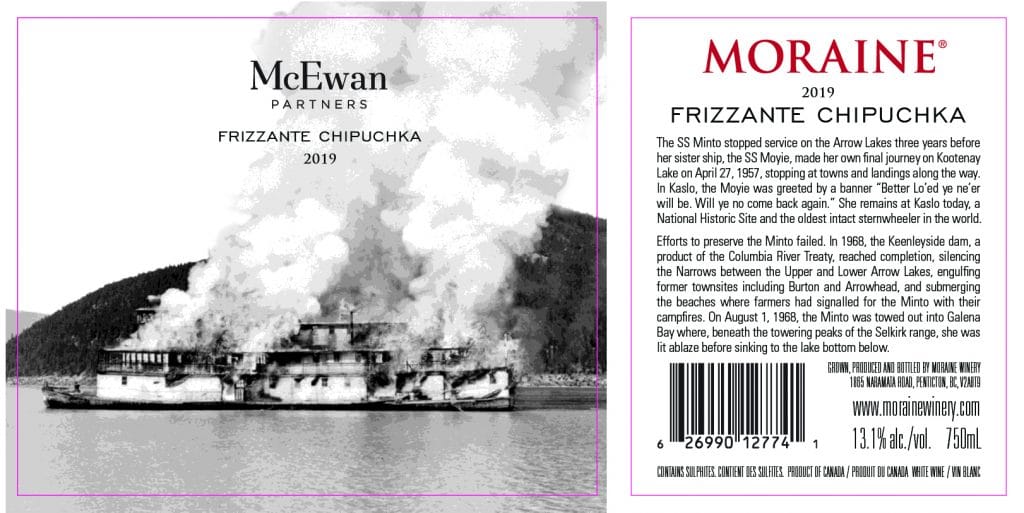 The SS Minto stopped service on the Arrow Lakes three years before her sister ship, the SS Moyie, made her own final journey on Kootenay Lake on April 27, 1957, stopping at towns and landings along the way. In Kaslo, the Moyie was greeted by a banner “Better Lo’ed ye ne’er will be. Will ye no come back again.” She remains at Kaslo today, a National Historic Site and the oldest intact sternwheeler in the world. Efforts to preserve the Minto failed. In 1968, the Keenleyside dam, a product of the Columbia River Treaty, reached completion, silencing the Narrows between the Upper and Lower Arrow Lakes, engulfing former townsites including Burton and Arrowhead, and submerging the beaches where farmers had signalled for the Minto with their campfires. On August 1, 1968, the Minto was towed out into Galena Bay where, beneath the towering peaks of the Selkirk range, she was lit ablaze before sinking to the lake bottom below.

Our label captures Martha Collins’s spirit. This entrepreneur thrived in the west’s male-dominated mining towns, from California to the Klondike. In BC, she owned hotels in Rossland, Ymir, Waneta, and Erie, there advertising “If you are looking for a good day’s fishing go to Erie, put up at the BC Hotel…for the best brands of wines, liquors, and cigars…” Her claims included Ymir’s Canadian Bell, and Erie’s Armstrong and Treasure Box Group, which employed four miners. The woman pictured is fishing on the Kootenay’s lower Bonnington Falls. A hundred yards downstream, the West Kootenay Power and Light powerhouse neared completion, to be linked to Red Mountain by the world’s longest transmission line. It powered the mines by day, and Rossland’s hotels and bars by night, including Martha Collins’ – the Collins Hotel on Washington Street, competed in 1897. The building still bears her name. Celebrate her by supporting #ReferToHer. 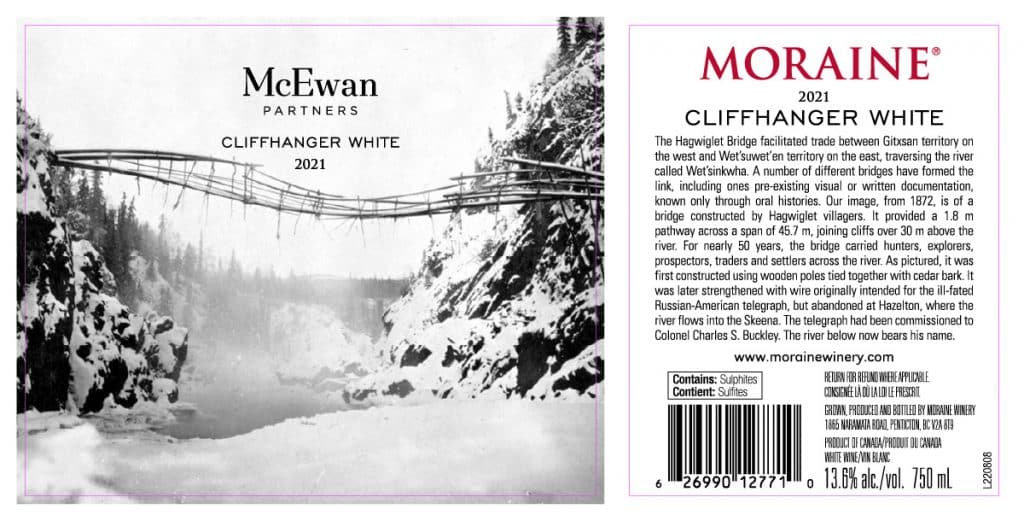 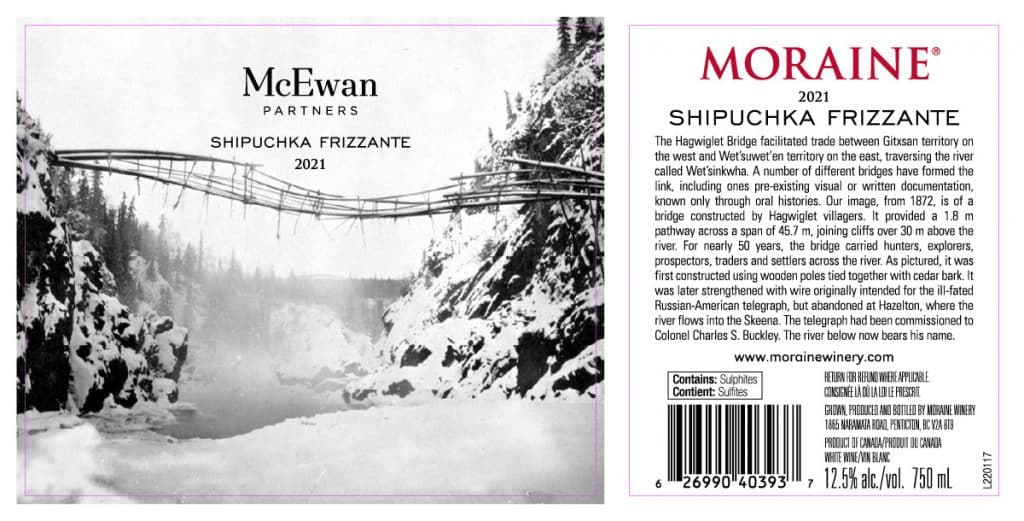 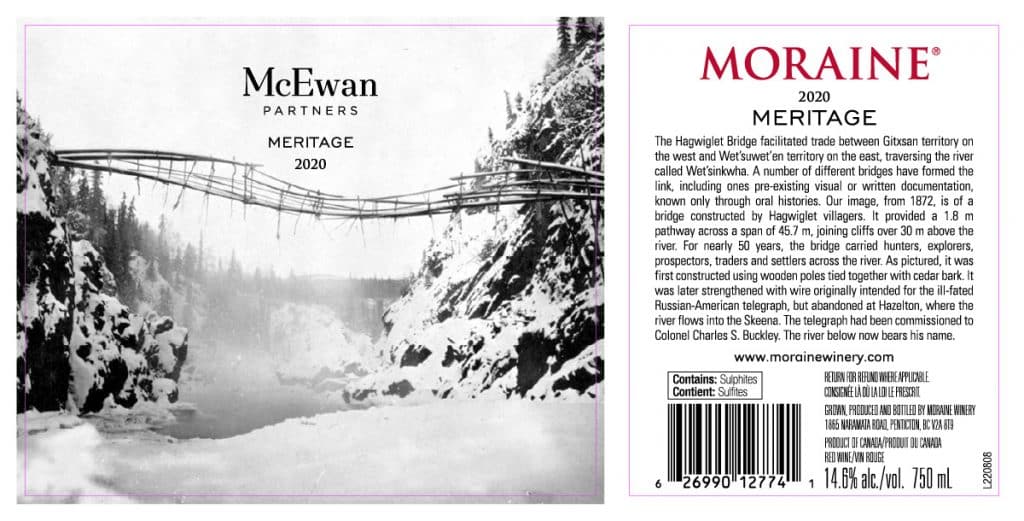 Our label depicts the Hagwiglet Bridge that facilitated trade between the Gitxsan territory on the west and the Wet’suwet’en territory on the east, traversing the river called Wet’sinkwha. A number of different bridges have formed the link, including ones pre-existing visual or written documentation, known only through oral histories. Our image, from 1872, is of a bridge constructed by Hagwiglet villagers. It provided a 1.8 m pathway across a span of 45.7 m, joining cliffs over 30 m above the river. For nearly 50 years, the bridge carried hunters, explorers, prospectors, traders and settlers across the river. As pictured, it was first constructed using wooden poles tied together with cedar bark. It was later strengthened with wire originally intended for the ill-fated Russian-American telegraph, but abandoned at Hazelton, where the river flows into the Skeena. The telegraph had been commissioned to Colonel Charles S. Buckley. The river below now bears his name.

McEwan Partners bought their employees lunch, had some fun and gave back to the community at the same time! 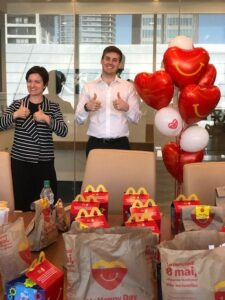 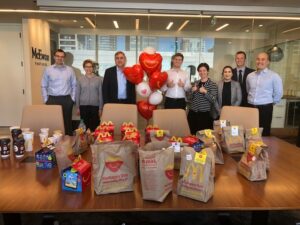